The AR200-6M, -12M, -25M and -50M have ranges in millimeters that match their model number. All models boast a 0.03% resolution across their entire measurement span.

All models are standard with Analog, Limit Switch and Serial outputs. The AR200 sensor is the only sensor of its kind to feature pushbutton selection of these output signals. Additionally, these laser sensors can be programmed using serial commands through a PC computer. 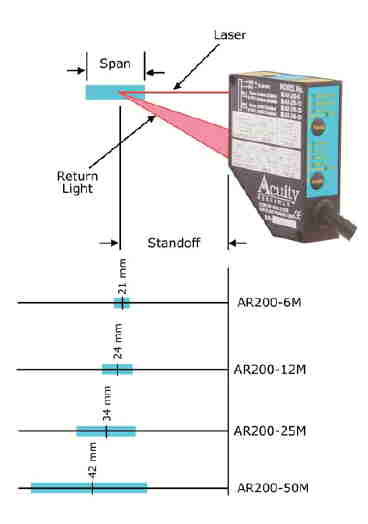 The AR200 laser measurement sensor is a digital device that includes several digital outputs. These outputs inlcude RS-232. After an on-board digital to analog conversion, the sensor also offers a 4-20 mA signal, a 0-10 V signal and two limit switches. Operators select the output by activating pushbuttons on the sensor’s interface panel or through software instructions.

All sensors come with an RS-232 serial output on a 6 foot, 9 pin cable that connects directly to PC style serial ports. Transmission rates are adjustable between 1200 to 230K baud. Serial output can be configured for one of several data formats. ASCII may be used for visual reading with a terminal device or emulation program, or a binary format can be used with application software. Using binary output, data transmission is 3 bytes / sample, 0 – 50K over full scale span and Hex FF terminated. ASCII output format is up to 11 bytes/sample.

A 4-20 milliamp current output is also standard. The zero and span for the current loop output may be set at any location. The span point (20 mA) may be made closer than the zero point if desired. The 4-20 mA output has a maximum voltage capability of 10 volts, and it is suggested that a 400 to 500 ohm load be used at the reading instrumentation for best accuracy.

A 0-10V voltage output is standard on the AR200 laser measurment sensor. The zero and span points for the voltage output may be set at any location within the natural limits of the detector’s measuring range.

Limit switches will output a current of 100 mA if the measurement exceeds the limit switch. This current can be used to trigger external features such as secondary processes, audible and visible alarms or other PLC operations. Includes two NPN (sinking) and PNP (sourcing).

The Acuity AR200 laser measurement sensors project a beam of visible laser light that creates a spot on a target surface. Reflected light from the surface is viewed from an angle by a CMOS line scan camera inside the AR200 sensor. The target’s distance is computed from the image pixel data. The AR200 can not be overloaded and measures accurately even when a mirror reflects the entire light beam back to the detector. This measurement principle is called triangulation. The signals are processed digitally and output on an RS232 line or are converted to an analog signal.

Although the AR200 laser measuring tools use metric nomenclature, the spans are in fact quarter, half, one and two inches for the -6, -12, -25 and -50 models, respectively.

The AR200 laser measurement sensors are versatile, non-contact devices found in many industrial applications around the world. Users appreciate the compact design and many output formats at a low cost.

The AR200 is one of Acuity’s newest devices that includes CMOS digital detection, serial and analog outputs and the most compact design. Examples of AR200 sensor applications include:

AR200 laser sensors are fast as well as accurate. The maximum sampling speed of the AR200 sensor is 1250 samples per second with a resolution of 0.03% of the measuring span. The AR200 is standard with many digital and analog outputs.

This Acuity model can only withstand temperatures to 50°C. Under some applicaiton circumstances, the AR200 laser measurement sensor can be used to measure to glass.

The semiconductor industry places stringent demands of their laser measurement sensors. They must be small, fast, accurate and have an attractive price. The AR200 meets this industry’s demands completely. Acuity’s novel sensor design is well suited to measuring to high-reflective silicon wafers. In most cases, there is enough diffuse reflectivity to measure off the polished surface at random angles. AR200 laser measurement sensors are widely used by U.S. and international fabrication equipment designers to monitor and control the location of silicon wafers throughout the fabrication process. The AR200 has a robust design and hold up to chemically-intrusive environments in the semiconductor fabriacaiton setting.

The metals fabrication business is one of the oldest industries in the world. Large mills are automated, but some smaller mills still rely on hand-held micrometers to gage metal thickness. AR200 laser measurement sensors are ideal for measuring steel strip thickness to fine resolutions. Steel passes between two opposing non-contact laser sensors. A computer or PLC receives the sensors’ output and calculates a resultant material thickness based on a simple mathematical formula that takes into consideration the separation distance of the two sensors.

The limit swithces on the AR200 sensors can be used to detect the location of a lap welds where two strips are joined.

The CMOS detector in the AR200 allows the sensor to accurately measure to a variety of colors, including dark steel. 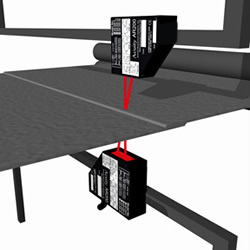 Postal system manufacturers use the AR200 to count letter packs in sorting facilities.

Industrial automation is widespread in the letter and parcel handling centers around the world. Sensors are commonly used to detect and measure pieces of mail at blistering speeds. Integrators of Postal Automation systems use AR200 sensors for counting individual flat packs in long stacks. Acuity’s novel sensor design is well suited to measuring to paper and cardstock materials of different colors. As the stacks of envelopes pass beneath the laser measuring sensor, the laser spot traverses the height profile. Software algorithms count each piece of mail. The AR200 has a robust design can easily integrate into OEM systems because of its simple power and data interface requirements. 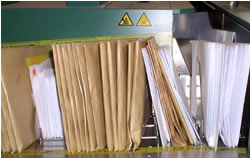 The AR200 is particulary suited for automobile testing applications. In one case, a large car company used the AR200 laser measurment sensor to measure the displacement of a brake pedal while a driver’s foot depressed it. The short standoff distance and compact size of the distance sensor made it simple to install behind the pedal. As the pedal was moved, its position was recorded by the laser sensor and transmitted to an analog data acquisition system. The fast sampling speed also allowed the engineers to measure the speed of hitting the brakes. AR200 sensors can also be used to measure engine fan belt vibration and motor vibration. 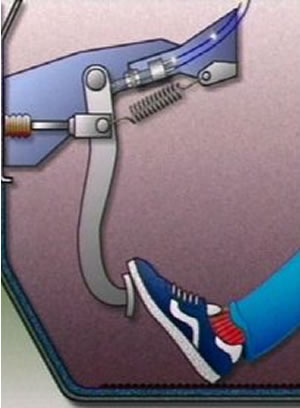 Laser caliper from a pair of AR200 laser measurement sensors.

Measuring thickness of lumber on a lumber grading line is a common application for Acuity laser sensors.  One of Acuity’s preferred sensor integrators, Laser-View Technologies, has integrated a pair of AccuRange 200 laser measurement sensors to create a laser caliper sysem. The system was installed into grading lines to measure thickness as pre-finished boards as they pass through a feed system.  Laser calipers can be used with a single or pair of AccuRange laser displacement sensors to measure average thickness on an automatic grading line.  Alarm outputs are sent to other process equipment when rejected lumber is detected.  This application can also be used to measure thickness of boards or sheets of other building materials liker gypsum board, OSB or metal as they are passed along a conveyor line.  Laser-View Technologies’ software is configured to automatically detect the leading and trailing edges of boards. The average of the measurements is displayed and the pass / fail status is indicated by the display colors.  The measurement profile and distribution are also displayed. This information can be archived for ISO 9000 quality control archiving purposes. For over 30 years Fox Controls has manufactured liquid Batch Controller Panels for the control of batching of a fixed volume of liquid into tanks.